The History of a Treasure

Almeron Follett's widowed mother moved her family from the East coast to the promise of the newly chartered State of Ohio in the early 1800's and settled her family along the Grand River, about a mile to the south of what is now The Lost Pearl. Young Almeron hunted the lush wildland around the river and learned the trade of carpentry. At the age of 25, Follett was thrilled to acquire a beautiful 57 acre plot of land just to the south of the Dayton family ranch. He cleared an area by hand and built the first portion of The Lost Pearl in the 1820's -- at that point a tiny one room timber frame house with an upstairs loft; something of a little house on the prairie.

As a pioneer of the area, Almeron Follett farmed the land and as a builder physically helped to construct many of the homes for what became Madison, Ohio. Follett and his wife, Claradina, had at least nine children and made a major addition to the home in the 1850's -- the familiar two story portion of the home at the Northern end of the home. In addition, multiple outbuildings were constructed including barns and a smokehouse. Almeron Follett was celebrated as a pioneer of Madison and passed away in 1896 leaving the home to his son, Edgar, who maintained the family home until his death during the great depression. Edgar's brother, Rensalier Follett remained in the area with property down the street.

After the passing of Edgar Follett, the property continued as the homestead of two different families, but gradually fell into disrepair and was condemned in the late 1970's when a young businessman and his wife, Richard and Joyce Dame, purchased the property and renovated the house adding indoor plumbing and electricity for the first time. Joyce created beautiful gardens and a floral business while her children played, raised horses, and made money with raspberry gardens. A modern barn was constructed in the 1990's and the Dame family moved on after their children were raised in this beautiful corner of the Grand River Valley.

Unfortunately, over the following years another family purchased the home and through a series of misfortunes was unable to care for the property, and the homestead fell into serious disrepair once again. While the house was a wreck, it was obvious that this was an especially beautiful property, and there was clearly a treasure to be found in the disrepair of the home. In 2012 the home was purchased and was resurrected and restored to a modern version of its former glory and opened as the Lost Pearl for others to enjoy -- once again a blessed place for pioneers seeking treasure. 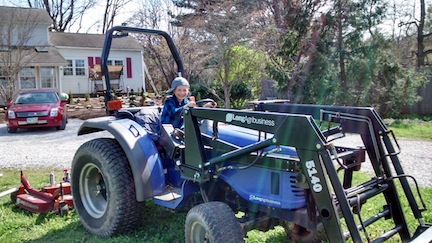 No, our 8 year old was not really driving the tractor :-)

Rest on the front porch 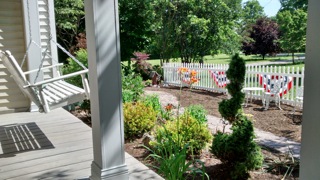 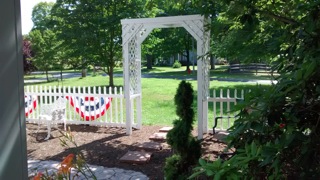 Walk in the Woods 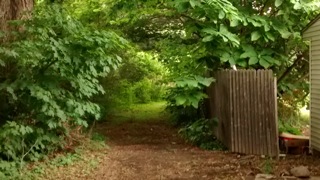 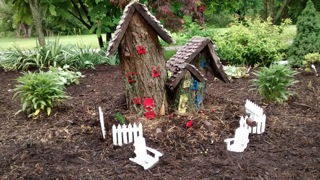